EASST is delighted to announce that our project ‘Safe Driving for Life’ has been recognised by His Royal Highness Prince Michael of Kent as an outstanding contribution to improving road safety.

On receiving the award the judges noted that, “the project was a good example of sound sustained achievement over several years producing a strong programme with demonstrated results in both injury prevention and costs avoided.”

In February 2013, the ‘Safe Driving for Life’ campaign was launched in Moldova by EASST partners the Automobile Club of Moldova (ACM), EASST & the European Bank for Reconstruction and Development (EBRD) to encourage fleet road safety management. A new Occupational Road Safety Working Party was established to support fleet managers, first meeting in March 2013.  The project’s aim was to introduce policies to improve road safety management in Moldova and reduce the number of occupational road casualties by making safer vehicle fleets, increasing knowledge of fleet managers in how to avoid road risks, improving management of driving behaviour, and reducing collisions and costs due to road crashes at work.

The project was developed as a direct result of the reported crash rate among trolley buses in Chisinau in 2011. A report by the trolley bus company, I.M. Regia Transport Electric (RTEC – an EBRD client), identified 178 road crashes in that year involving more than half the fleet, 41% of which were the fault of trolleybus drivers. It was also found that a significant number of incidents involved maxi-taxis. Maxi-taxi collisions overall in Chisinau resulted in 227 injuries and 7 deaths in that year. It was clear that an initiative targeting ONLY the trolley-bus company would not be enough. This project therefore engaged all public transport fleet providers – including the largest maxi-taxi company – as well as many private fleets to address the issue of fleet road safety. 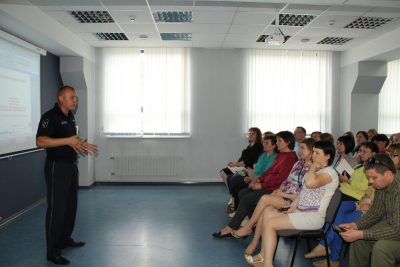 In 2013, supported by the EBRD, the ACM and EASST conducted a seminar and training on Occupational Road Safety Management to improve the performance of public and private fleets operating in Chisinau. Representatives of Moldovan public bodies and private businesses, along with their drivers, signed road safety commitments and exchanged experience with experts from the Kent ‘Driving Business Safely’ campaign, the Freight Transport Association, EBRD and EASST. During the seminar the Moldovan participants proposed the establishment of an Occupational Road Safety Working Group for Chisinau – a home-grown initiative and the first of its kind in Moldova. The Working Party involves the municipal transport authority, police, public transport providers and private companies. As a result, Chisinau can point to improvements in public transport fleet management and in the road safety record of businesses like the energy supplier, Gas Natural Fenosa. Supported by the ACM, Gas Natural Fenosa in particular have had remarkable and measurable success in improving road safety.

The Occupational Road Safety Working Group have met regularly since 2013 and have implemented impressive improvements to their fleet management practices – including better monitoring of costs and road incidents, better testing of drivers and vehicles, better communication with drivers, steps to improve motivation and training, and safer forecourt design. Based on local authority data from the Transport Department of Chisinau Municipality (backed by police data) the overall result compared to 2012 has been a 33% decline in public transport collisions, and a 38% decline in both fatalities and serious injuries involving public transport by the end of 2016.

In addition, since 2013 Gas Natural Fenosa and ACM have implemented significant activities for safer fleets and improved road safety policy in the company. As a result, Gas Natural Fenosa have become one of the few companies in Moldova to adopt and implement a sustained programme of fleet safety management and training for its employees. To date through regular monitoring of company performance, insurance claims and other indicators, they have seen a 37% drop in the number of road crashes involving Fenosa vehicles and a financial saving of almost €400,000. (Based on their estimated loss of €4500 per vehicle involved in a crash, including indirect costs).

The project inspired EASST to go a step further and build a course that would deliver leading industry expertise to everyone. So we teamed up with Cranfield University and the IRU Academy to introduce a specially designed online training programme. The EASST Academy Road Safety at Work: Online Course for Managers aims to help fleet managers globally set up, run and monitor effective safety systems. With one in three road crashes taking place when people are driving for work purposes, reducing the risk of commercial vehicles and public transport globally could play a very significant role in cutting road fatalities and achieving the targets of the UN Decade of Action for Road Safety 2011-2020.