Emma was invited by the International Transport Forum (ITF) to present at this year’s Summit in Leipzig, Germany on the results of our assignment with the European Bank for Reconstruction and Development (EBRD) to assess mobility choices for women in rural Tajikistan and how these impact on economic opportunity. Find out more about the session here.

Funded by the EBRD Shareholders Special Fund, the assignment focused on five villages and towns situated along the Obigarm-Nurobod road development. People living along this road rely on poorly maintained local access roads connecting to the existing M41 highway. The new road, which is part of the CAREC corridor programme, will replace a section of the M41 highway due to be flooded as part of the development of a new hydropower reservoir. This new transport landscape will have a significant impact on the local population.

They will be exposed to new road risks related to high vehicle movements along the new road alignment both during and after construction, but they will also have increased access to services and economic opportunities, particularly for women.

Working with our local partners, Young Generation of Tajikistan (YGT), our role has been to build road safety partnerships with local authorities, traffic police, schools, women, and children in the community to mitigate the main road risks. We also looked at identifying transport needs and exploring road safety related economic opportunities for women from the construction and maintenance of the new road.

With the technical input of Dr. Evangelos Bellos of NTUA and EASST Trustee, Kate McMahon, we developed a detailed household travel pattern survey and trained our local team to improve their knowledge and skills in preparing and conducting the survey on-site.

Towards the end of 2020, the team were able to travel to the region to carry out the first-ever Safe Transport Needs Assessment of 68 households (365 individuals) across 5 towns and villages to identify existing travel patterns and transportation needs. The team gathered information for men, women, boys and girls, with increased focus towards vulnerable road users (young, women, people with disabilities etc.). 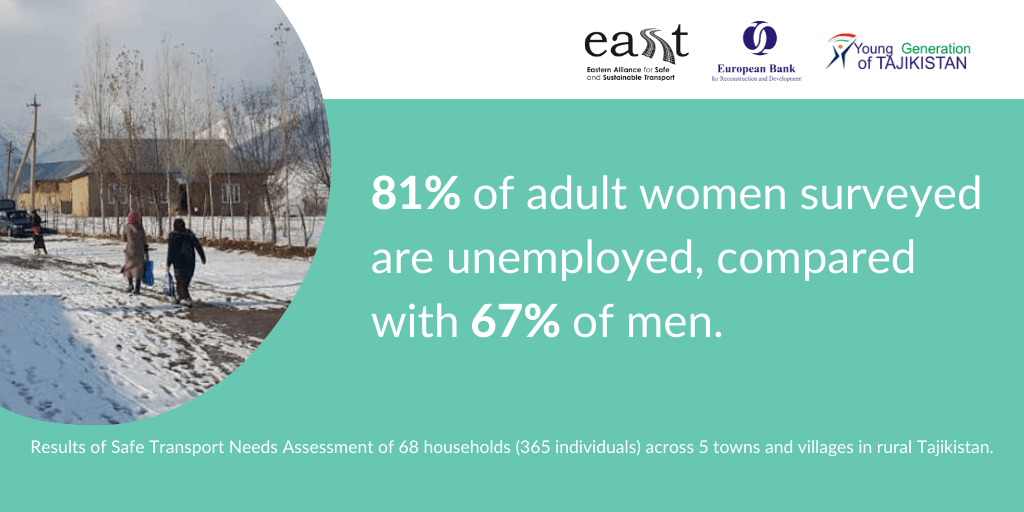 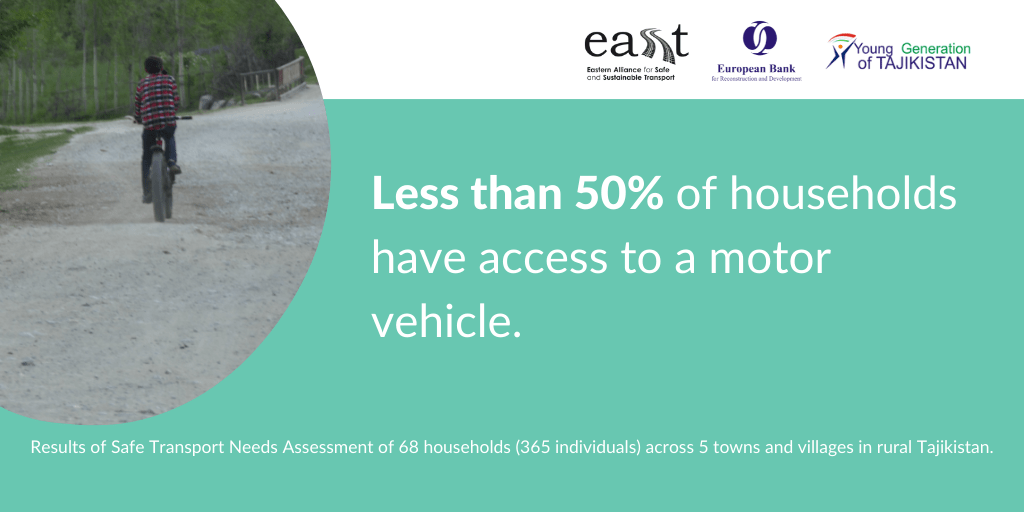 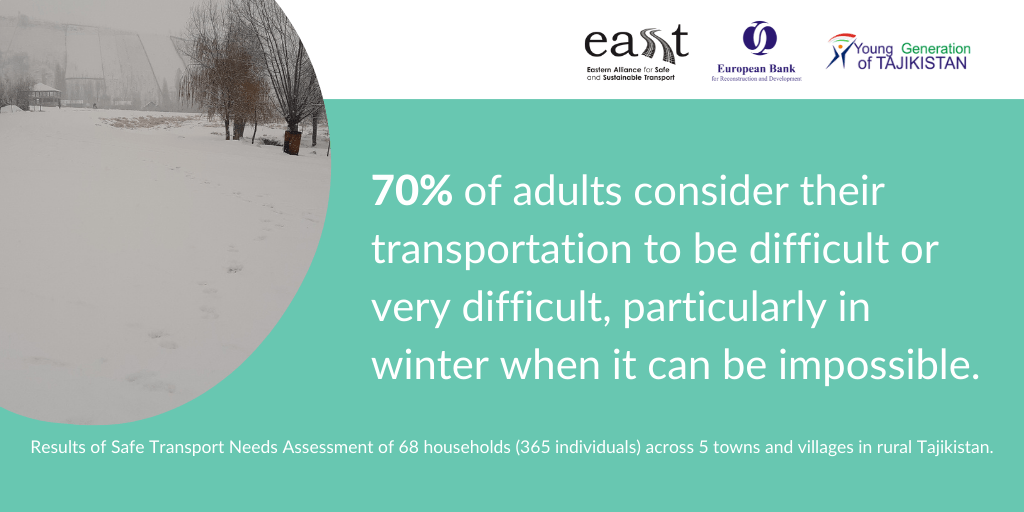 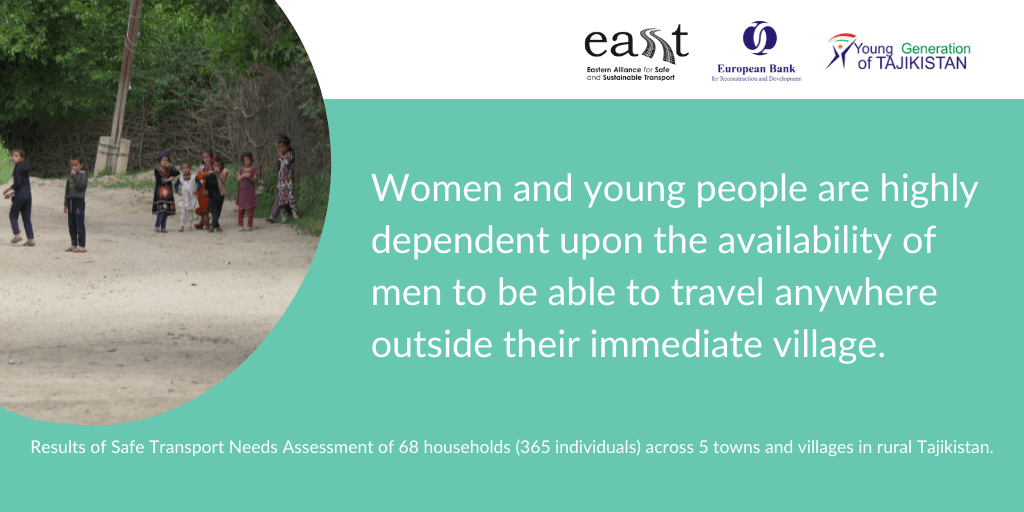 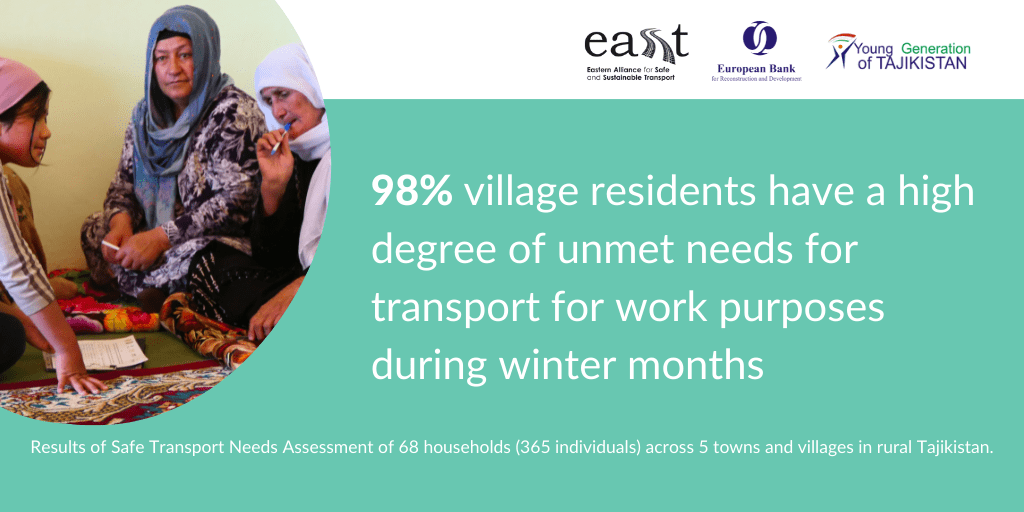 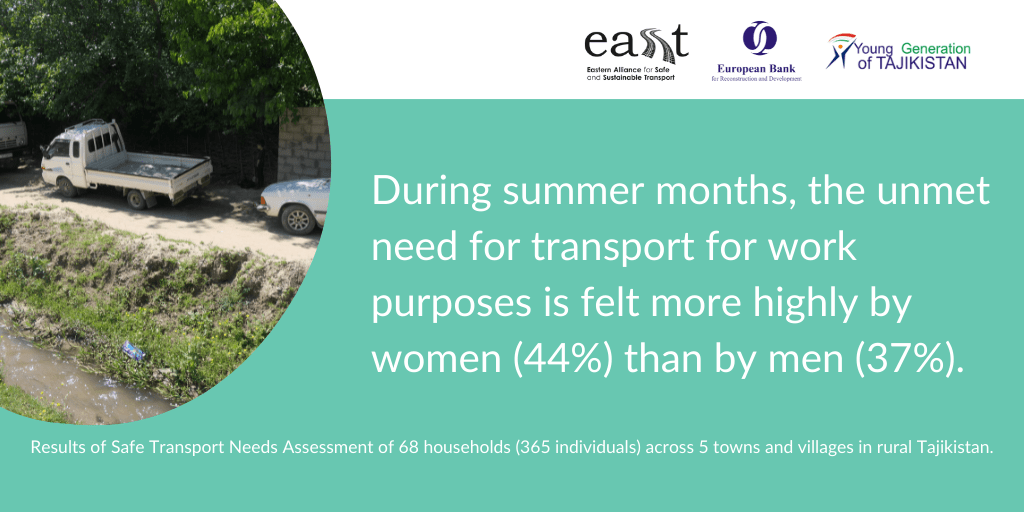 The survey found very high rates of unemployment, especially among women: 81% of females surveyed reporting that they were unemployed, compared with 67% of males. 70% of all adults considered their transportation as difficult or very difficult, with most stating that it is difficult or impossible to travel for any reason during the winter period. Almost everyone surveyed (96-98%) said their transport needs for work were unmet.

When they do travel, the usual mode of transport for villagers for both working and non-working reasons is walking (for short distances) and informal taxis/marshrutkis (for longer distances) due to the lack of public transport and the low private car ownership rates. Almost all children from the age of 7 years reported walking as the main form of transport to/from school. In many cases they need to walk for quite long distances every day without the supervision of an adult. This low familiarity in dealing with road traffic may create important road safety risks, especially when moving as pedestrians, which need to be considered as the road development progresses.

When analysing different reasons for travel we found that women and elderly persons typically travelled on foot for social and home-related reasons to other houses nearby. Shopping or longer distance trips, when necessary, tended to be carried out by men. None of the women surveyed were drivers, and only rarely did they travel by private vehicle as a passenger. For long distances, they rely almost entirely on male-driven taxis/marshrutkis, which present their own set of issues in terms of availability and security.

For instance, during the Spring/Summer months, taxis are significantly less available as many of the men travel to Russia for work, sending remittances home to their families. This significantly limits the ability of local women to travel outside of their villages and exploit their own economic potential – either for paid employment or as a small entrepreneur needing access to markets. In many cases, women expressed concerns about traveling alone with unknown taxi drivers, preferring to delay their trip(s) until another person joins them.

The assignment demonstrates how the social and economic opportunities – especially those of women and young people – in remote rural areas are badly impacted by a lack of mobility choices. Smart thinking about transport services to rural areas, based on gender sensitive planning, could be a good investment for governments wanting to improve economic performance.