EASST founding partner Poghos Shahinyan has been appointed as the Secretary of the new National Road Safety Council of Armenia, chaired by the Prime Minister.

Membership of the Road Safety Council includes the Deputy Prime Minister and other key government ministers relevant to road safety policy, along with active civil society road safety campaigners. This new Council will be responsible for overseeing and developing the country’s National Road Safety Strategy and Five Year Action Plan for 2010-2015. 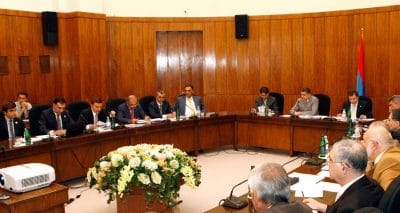 First sitting of the National Road Safety Council chaired by Tigran Sargsyan, Prime Minister of the Republic of Armenia  in 2010.

The Council’s secretariat will be led by Poghos Shahinyan, whose road safety NGO (NRSC – also called the National Road Safety Council) had its first meeting as a small new campaigning organisation in 2005 with sponsorship from the FIA Foundation. As a result of their efforts, Armenia’s dormant seat belt law was enforced for the first time in 2009, resulting in a 20% reduction in road fatalities and 12% decline in casualties in just one year.

From its inception, the Council was a ground-breaking initiative – a road safety coalition involving the Automobile Federation of Armenia (FAA), the Protection of Consumer Rights NGO, the Armenian Public Health Association, the Society for Drivers’ Rights and a diverse group of young professionals, the British Alumni Association. They worked with a broad range of local groups, academics, consumers and the road traffic police. Until the arrival of the NRSC, many of these organisations had been working in isolation. Under the umbrella of the new National Road Safety Council, they will continue to collaborate to promote road safety.