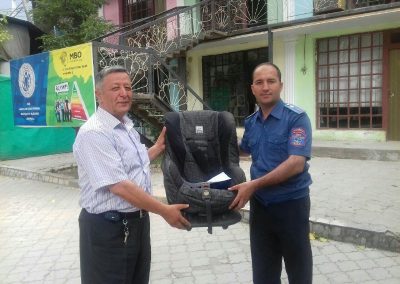 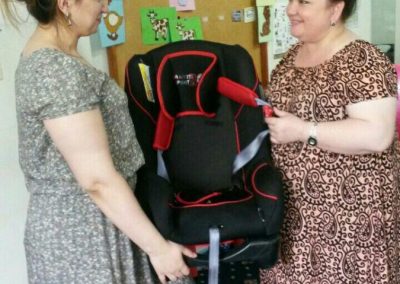 Working in partnership with Kier and the Young Generation of Tajikistan (YGT) and supported by the EBRD Special Shareholders Fund, EASST has developed a car seat recycling and loan scheme – raising awareness of the importance of restraints and providing child car seats to families who could not otherwise afford them.

The probability of children aged 1-7 years being injured in a crash or sudden stop is reduced by around 70{3dc9aefcaf4fab3f3714c0980bbe5eee9f3ebc2c2deab95dc156424ca5d31f8b} when an appropriate child restraint is used instead of a seat belt only. Child restraints are a vital protection for child passengers. However, in low and middle income countries like Tajikistan the cost of child restraints can be an inhibiting factor for many families.

Earlier this year up to 200 car seats were collected by Kier at their Household Waste Recycling Centre in North Somerset – where they are always looking to divert waste streams from landfill and find a viable reuse option for them. To ensure that the seats collected were in a suitable and safe condition EASST sought guidance from the AA to produce a safety guide so that each seat could be thoroughly checked before re-distribution. Of the 200 collected approximately 50 per cent passed the safety and cleanliness checks and so were logged for customs and packed up onto pallets to make the 4,000-mile journey to Dushanbe.

Once the seats had safely arrived in Dushanbe, the YGT used their local networks to identify suitable families as well as working with a local NGO that supports parents of children with Autism to distribute the seats.

Each seat is initially fitted by the YGT – who also issue information and advice on the importance of child restraints and how to use them safely – and loaned to a family until their child has grown out of it. When returned, the seats undergo a thorough safety check and, if still in a safe usable condition, are passed to another family for use.

A recent observational study of over 5000 cars conducted by the YGT in Dushanbe found that only 3.3 per cent of children were fastened in child car seats. All these children were front seat passengers. Therefore, alongside this scheme, EASST and the YGT are beginning a nationwide media and public awareness campaign this August to promote the use of seat belts and child restraints in Tajikistan more generally. Wearing a seat belt or using a child restraint are simple measures that really can save lives.

Building on the model

The model of this project is now expected to become part of Kier’s tendering process for new contacts to demonstrate to clients that waste diversion from landfill can take many forms and benefit others. EASST hopes to extend the scheme to other countries in which it works. It is also hoped that the scheme can be widened again to collect and distribute cycling safety helmets and other road safety equipment in the near future.