What steps has Georgia taken towards e-mobility? How can we improve the current air quality in Georgia which constantly rates among the lowest in Europe? What particular steps can further improve the e-mobility movement?

In 2017, Georgia purchased 143 environmentally-friendly buses that run on CNG (Compressed Natural Gas), which is a significant step towards sustainable transport. And in May 2018, the first electric bus started operating in Tbilisi in Georgia’s attempts to move towards clean transport and e-mobility.

However, in April 2018 Tbilisi City Hall also announced a tender for the purchase of diesel buses which resulted in 90 Euro 6 diesel-run buses being put on the roads in the city. According to the TRUE Initiative, even newest diesel cars throughout Europe pollute with NOx and CO2 emissions up to 18 times more than the allowed levels. In fact, “even the best Euro 6 diesel groups produced NOx emissions of more than twice the type-approval limit, and all other manufacturer groups were at least four times the type-approval limit.” So, while Euro 6 diesel is supposedly more environmentally-friendly than its predecessors, it still emits more CO2 (greenhouse gas) and NOx (greenhouse gases and major components of smog) than CNG or electricity. So what is the explanation for such a downgrade? 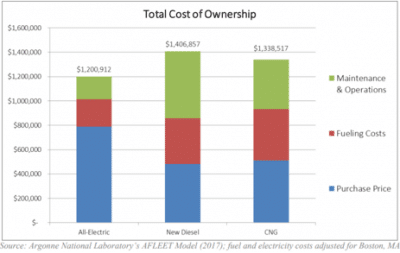 The primary reason is cost.

However, in October 2017, the Sierra Club released a report comparing the total cost (purchase, fueling costs, maintenance and operations) of CNG, diesel and electric buses (chart 1: Total Cost of Ownership).

The report found that electric buses are in fact 15% cheaper to run that deisel buses. So already it makes economic sense to invest in electric buses. This is further supported by the fact that the cost of battery packs is also getting lower.

So, if the government ultimately aims to maximise the number of daily trips carried out by public transport – it is essential to make sure it is a clean mode of transport because more trips means more emissions. Therefore, being mindful of the cost and environmental benefits in the long run it makes sense to invest slightly more now.

Accordingly, Tbilisi Mayor Kakha Kaladze has promised that Georgia will fully transform its bus fleet from diesal to electric buses in the near future, stating that “developed countries are going to switch to electric buses starting from [about] 2023. Tbilisi will not be an exception. We will import more electric buses in the coming years. We are also working on building a factory for producing buses.” Doing so will help Georgia reach it’s 2030 Global Agenda Goals, which states that “By 2030, reduce the adverse per capita environmental impact of cities, including by paying special attention to air quality.”

Shenzhen in China, with a population of 12 million, has already become the first city to fully replace its bus fleet with electric models. According to Citylab, the city serves its commuters with 16,359 electric buses, which is a clean and quiet mode of public transport. And now, with a growing market of EVs, there are numerous options for Georgia to choose from to ensure that price satisfies the budget. For instance, Belcommunmash, a mechanical engineering company in Belarus, is eager to form a partnership with Georgia to deliver electric buses. In fact, according to Euroasia Network, in the near future, Belcommunmash will deliver two electric buses to Georgia as part of a trial run.

If, however, the government doesn’t comply with it’s goals, it is the responsibility of the public to hold the authority to account. For instance, in Bogota, Colombia, in May 2018, when the government announced a tender for purchase of new buses to serve the public, it paid little attention to sustainability as a criteria of the tender. Consequently, it was the citizens who resisted and insisted on including sustainability as a criteria in the tender. The effect was that the points allocated to bidding companies for proposing environmentally-friendly (electric buses) increased from 50 to 400, which is a big proportion in terms of winning the tender. In fact, researchers from the Overseas Development Institute (ODI), a global think tank, acknowledged that in comparison to some other cities, Bogota has come the furthest in securing a better approach to improving transport, partially due to active civil participation.

Looking back at the growth of electric and hybrid cars in Georgia: back in 2015, there were only 5 electric cars registered and 1,317 hybrid cars. In 2016, the number of electric cars grew to 34 and 5,390 for hybrid cars. Last year, the number of electric cars totalled 328 and hybrid cars 9,870. Of course, these numbers are small compared to 1.12 million cars that are registered in the country but the numbers are growing. In addition, Hybrid cars that are 0-6-years-old are also eligible for 50% reduced tax upon import and all electric cars are tax-free. As a further incentive, as of 2018, around 60 charging stations for electric cars had been installed in Georgia, which are free to use until 2019. Switching to electric could acually be even cheaper for Georgians in the long run too as the country already generates most of its energy from hydro-power plants, while petroleum, diesel, and gas are imported products, and prices depend on the global market.

Electric cars are also most frequently criticised for their short battery life. Nissan, however, recently announced that batteries can now be replaced for much less. Indeed, according to the Green Car Report, electric-car drivers can now exchange their old batteries at a fee of about $2,800, while previously the cost of a new battery ranged between $6,000 and $8,000. This fact further incentivises the purchase of electric cars because they are proven to have longer lives than petroleum or diesel cars. If batteries can now be remanufactured for half the previous price, Georgia is a potential market for cheaper, used electric cars.

So, with cheaper, locally generated fuel, accessible charging stations, and cheaper batteries choosing electric could actually be more convenient as well as cheaper and more environmentally-friendly.

Nevertheless, as of first quarter of 2018, there were 1100 electric engines in Georgia, which is a significant increase, but still a tiny proportion of the total car fleet. In order to increase the number of electric vehicles enough to make a significant impact on the environment, Georgia needs to up its game in terms of incentivising electric vehicles, as well as investing in electric buses. In Canada and China, for example, as well as numerous other countries, governments are incentivising the purchase of electric vehicles through subsidising the cost. People still have the notion that electric vehicles are more expensive. However, if the government was to subsidise part of the original cost and further maintenance and fueling more people would be inclined to choose electric.

Clearly it’s time for Georgia to move away from its small initiatives that bring about slow change, and adopt a more innovative, nation-wide clean mobility plan.