One of Moldova’s most anticipated sports events of the year – the Kids Run Day took place in Chisinau’s Great National Assembly Square at the end of September. During the event, children showcased their sporting abilities, as well as participating in a fun programme of educational road safety activities led by EASST partners the Automobile Club of Moldova (ACM), in collaboration with the National Patrolling Inspectorate, “Oratorul” Theatre and other local partners. 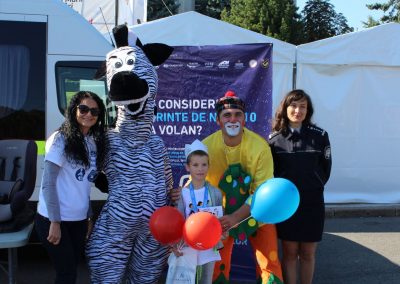 ACM mascots were the main heroes of the event, working with the children to share smile, a good mood, and most importantly helpful tip on safe street behaviour.

Participants in the children’s marathon were also awarded special prizes including notebooks with the rules of the road, pencils, t-shirts, reflectors and informative brochures.

Children were not the only ones to benefit however. The ACM and NPI also distributed brochures, car stickers and t-shirts to parents while showing them videos and initiating discussions on the importance of using a child restraint systems in their cars in order to keep their kids safe on the road.

This informative and preventive action was carried out as part of the ACM’s “Keep your kids safe in cars!” project supported by the FIA, FIA Foundation and EASST.