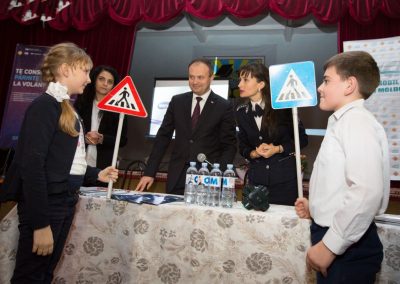 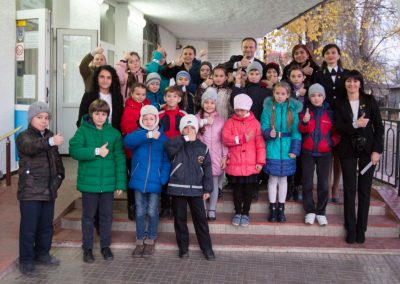 Students of the “Universul” Theoretical Lyceum in Chisinau had a special surprise last week when they were visited by Parliamentary Speaker and Road Safety Ambassador Andrian Candu for an interactive lesson on road safety. Along with EASST partners, the Automobile Club of Moldova (ACM) and the National Patrolling Inspectorate, the children were tested on their road safety knowledge, and received extra training on the potential road risks around their school and homes, and the importance of wearing reflective accessories to be seen at night – which is in fact written into Moldovan traffic law.

Mr Candu Tweeted from the event to say, “I want to know every kid is safe! Had a great meeting w/ pupils & talked about caution in traffic, how to make sure before crossing the street & that it’s necessary to wear reflective band.”

All pupils (and teachers) were given reflective accessories so that drivers can see them better at night, particularly as the nights are drawing darker.

Teachers at the Lyceum welcomed the initiative and also reported some of the measures that they have introduced to improve road safety around the school, such as marking pedestrian crossings. Still it was reported that a mother had recently been in involved in a minor collision due to a speeding vehicle.

It was also heard from the National Patrolling Inspectorate that in the first 10 months of this year, 13% of all road traffic collisions in Moldova have involved children, with nine fatalities.

The event took place on 21st November. The materials distributed were developed with the support of the FIA (Fédération Internationale de l’Automobile), FIA Foundation, EASST, the Parliament of Moldova, ProtectMD Foundation, Automobile Club of Moldova, REPEMOL and National Patrolling Inspectorate.