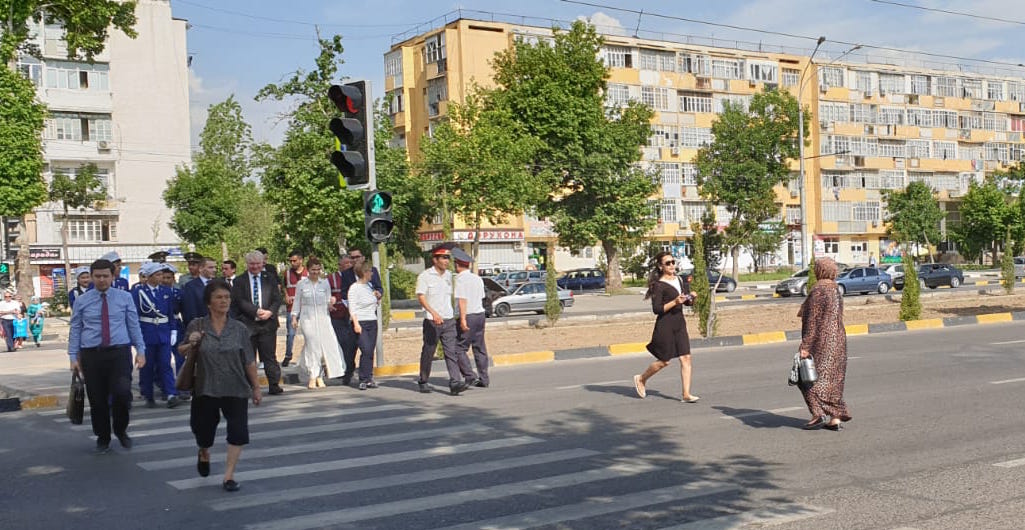 Since the beginning of 2018, two people have died and four have been injured on the road in front of Istiqlol Hospital in central Dushanbe, the capital of Tajikistan. More than eight other road collisions have also occurred where luckily no one was injured.

Dushanbe – like every major city – has road traffic ‘black spots’ that need to be corrected. We have been working in collaboration with our local partner the Young Generation of Tajikistan, along with the European Bank for Reconstruction and Development (EBRD), the Dushanbe Mayor’s Office, the Ministry of Internal Affairs, and the Safer Roads Foundation to identify and improve the most dangerous of these crossings and make Dushanbe’s roads safer, beginning with the crossing at Istiqlol Hospital.

In 2017, there were 1,303 road traffic collisions in the whole of Tajikistan, which killed 433 people and injured 1,377. In Dushanbe alone there were 271 road crashes, half of which involved pedestrians AND two out of three involved children and young people under the age 30.

The development of the crossing at the hospital began a year ago with two four-day training programmes on the essentials of safe road engineering for more than 30 postgraduate students and professors of the engineering faculty at the Tajikistan Technical University.

Yesterday morning the new pedestrian crossing outside the hospital was officially opened. The crossing is being used by more than 4,000 people every day. The location of the crossing means that many people with limited mobility are using the crossing regularly, such as wheelchair users, people using mobility aids, and those with visual or hearing impairments. For this reason, great care has been taken to ensure the crossing meets the needs of all people with audio-visual crossing signals and accessibility ramps.

The new crossing has already made a visible and tangible difference. During the official opening, several passers-by were interviewed for their feedback. They were universally delighted with the improvement. They were all regular visitors to the hospital, and said that for them personally it has been wonderful. One women mentioned that many visually impaired people use the crossing, and that they can now cross easily with the audio signal.

The crossing was opened by a number of important stakeholders including the World Health Organisation, the British Ambassador to Tajikistan, the Head of EBRD in Tajikistan, as well as representatives of the Road Traffic Police, the Ministry of the Internal Affairs, state TV channels, and Young Road Inspectors from nearby schools.

As part of the project, around 200 high-visibility pedestrian road signs have also been installed across the city at high-risk road crossings, including near schools. The signs can be seen at night from a distance of 1,500ft – a distance 3 times greater than before. They are also much larger than the pedestrian crossing signs they replaced. An informal survey of taxi-drivers in the city has found that they are making a great difference, particularly at night when drivers are tired.

The new signs have received high personal praise from the Mayor of Dushanbe who has instructed the Transport Department to install even more signs in the city. There are now also plans for 5 more pedestrian crossings to be renovated in the near future.