On 20th September EASST partner the Belarusian Auto Moto Touring Club (BKA) together the Road Traffic Police of Minsk and the bicycle shop M-velo returned to kindergarten No. 239 in Minsk to continue the children’s road safety education.

Following on from previous sessions, which focused on pedestrian safety and key road safety messages, this session addressed safety issues around cycling. 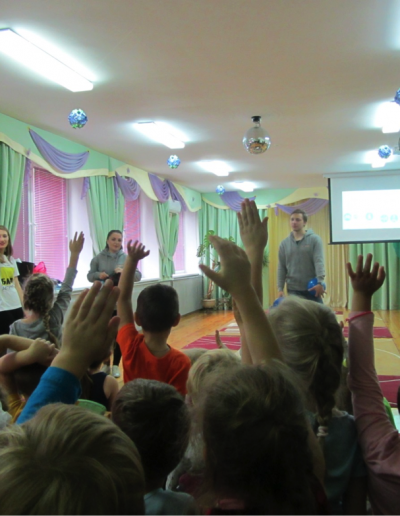 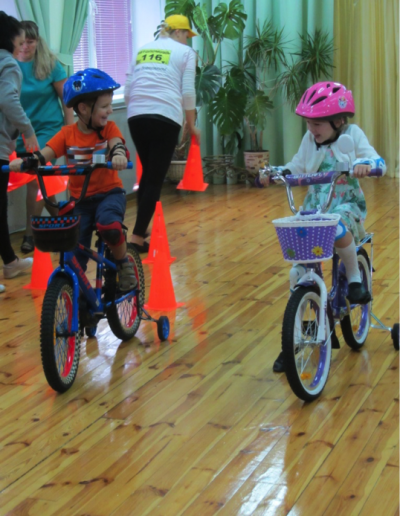 In Belarus cycling is becoming increasingly popular. Unfortunately, however, this has also led to an increased number of road traffic collisions involving cyclists and there are no laws or standards in Belarus around wearing helmets or reflective clothing. As a result, in 2016 at least twelve children were killed whilst riding their bikes on the road.

The training started therefore with a presentation on where it is safe for the children to ride their bikes, and the dangers of cycling when it is dark, or bad weather. Children were also taught basic rules around cycling safely such as dressing brightly and signaling to car drivers that they are there through puzzles, riddles and drawing.

Project partners from M-velo talked to the children about the importance of wearing a cycle helmet and taught them how to wear and fasten their helmets correctly.

In teams, the children then got the opportunity to test themselves as independent road users by cycling round a simulated road circuit, avoiding obstacles in the form of traffic cones and demonstrating which signals they should make when turning or stopping.

The winning team received bicycle helmets and sweets from the BKA. While all participants without exception received brochures on safe cycling developed by the BKA as well as reflective elements featuring BKAshka (the BKA mascot!) on his bicycle.

Both the BKA team and the children enjoyed the event and had a lot of fun. However, BKA hopes that their activities were not only entertaining but also very useful for children because, as the most vulnerable road users, they need to know how to behave and be safe on the road.

Click here for local media coverage of the event.