On 31 July 2017 the President signed a new decree on measures to strengthen road safety in the Kyrgyz Republic.

The decree comes after civil society groups, including EASST partner Road Safety Kyrgyzstan, presented a joint policy document to the presidential administration looking at why road safety in Kyrgyzstan is so poor and setting out measures by which the situation can be improved. 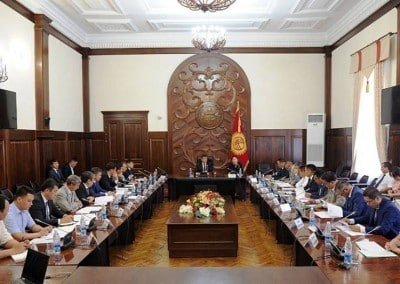 This intervention, in large part, comes in response to a deadly spate of road traffic collisions in March-April this year, which among them saw two schoolboys being hit by a speeding driver whilst crossing the road via a zebra crossing. However, with more than 1000 people in Kyrgyzstan being killed on the roads every year, road safety is also a serious burden in terms of the country’s long-term social and economic development.  Speeding, poor road infrastructure, a lack of driving culture, outdated policies, lack of enforcement, and corruption around licensing are just some of the main reasons behind Kyrgyzstan’s poor road safety record. The new decree aims to address each of these key issues by:

Children’s road safety was also highlighted as a matter of urgency during the Security Council meeting in which the degree was signed. A lack of safe infrastructure around schools in the capital city Bishkek was identified as a particular concern, with the majority of schools situated along busy roads. As a result, work has already started on making areas around schools safer in time for the new school year, with new zebra crossings being painted and other infrastructure improvements under way.