Then and Now: promoting alternative transport choices for safer and healthier streets in Georgia

by EASSTMar 31, 2019Georgia, News, Sustainable Mobility, Then and Now 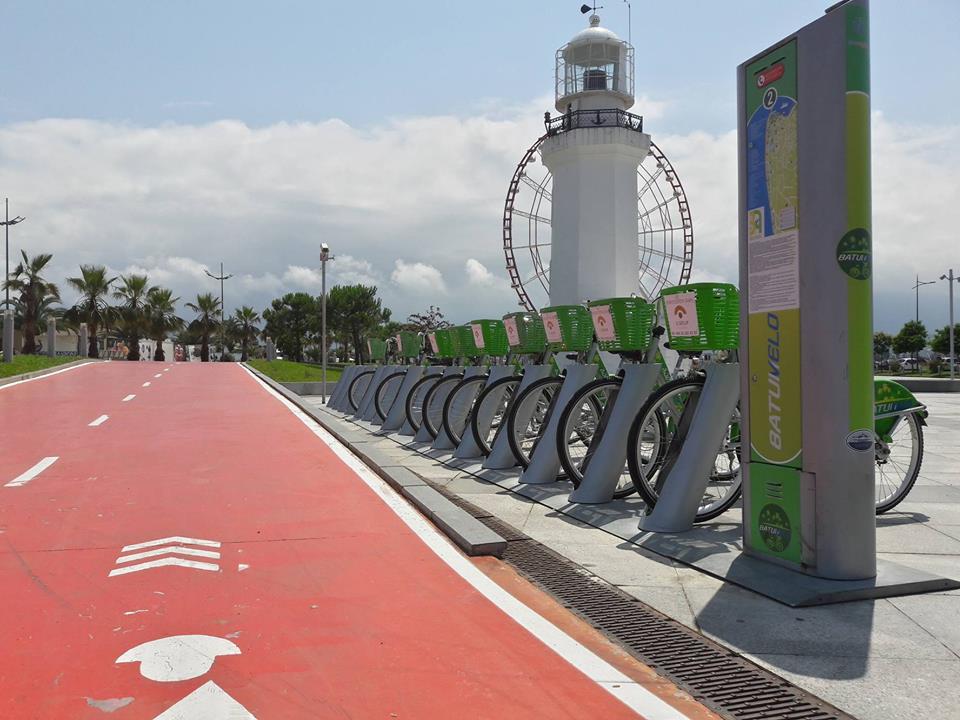 The streets of Tbilisi are typically dominated by cars and other motorised transport. The growing vehicle fleet has been choking the city in traffic, congestion, and air pollution – 70 per cent of which is caused by road traffic. This is unsafe for road users and poses a serious public health risk for everyone. Most vehicles are over 10 years old and poorly maintained. Because older and poorly maintained vehicles are more polluting, there is a significant impact on air quality levels, particularly in densely populated urban centres.

To tackle this issues, in 2014 the Partnership for Road Safety (PfRS) launched an innovative citizens’ action project with Ecovision and Elva Community Engagement, sponsored by the East West Management Institute and USAID. The aim was to build public support for cleaner transport choices by monitoring air quality and promoting alternative modes of transport. The project was the first of its kind to be implemented in Georgia. Working with volunteers including schoolchildren, scientists, government representatives and members of the public, ‘Air Quality Eggs’ (an innovative air quality monitoring technology) were used to track air quality levels in local areas. PfRS used the results to draft a series of policy recommendations to make Georgia’s air cleaner. They also delivered a public awareness campaign encouraging people to take up cycling, use public transport, walk, or even adapt their driving style to increase fuel efficiency and air quality.

Improving urban transport management and promoting alternative transport choices has been a priority for PfRS ever since. Since 2016 they have been working in close collaboration with the Transport Department of Tbilisi City Hall to make cycling safer and easier in the city so that it can become a viable daily alternative to motorised transport. With the support of the EU funded Eastern Partnership Civil Society Fellowship Programme, the PfRS’s Lika Merabishvili has driven the campaign forward.

Using the NACTO Global Street Design Guide a 2km area of road was evaluated for its suitability. The evaluation revealed several areas for improvement including the placement of traffic lights, bus stops and cycling lanes. This has been presented to Tbilisi City Hall and the recommendations are being addressed, while a tender has also already been announced for the construction of three new bike lanes in the city. The new lanes will mean that within the last three years, Tbilisi will have transformed from a city with zero cycling infrastructure to having a 12km cycling network with more than 70 new cycling parking spaces.

These developments have been complemented work with schools and universities to promote the health benefits of cycling. Over 2,000 young people have learned how to stay safe on their bikes – emphasising the importance of following the rules of the road, wearing helmets, and visibility. Monthly bicycle marches through the streets of Tbilisi have seen a critical mass of young people, as well as representatives of Tbilisi City Hall and the media, demonstrate the growing popularity of cycling in the city. This has manifested in a three-fold increase in the membership of the Tbilisi Cycling Club in the last year alone.

PfRS have also been making an impact on a national level. In 2017 they contributed to the development of Georgia’s first National Strategy and Policy Framework on Sustainable Urban Transport to encourage the development of low carbon urban transport systems and improve the quality, accessibility and sustainability of urban transport in Georgia. During a policy development meeting, Gela Kvashilava of PfRS presented on the project entitled, Green Cities: Integrated Sustainable Transport for the City of Batumi and the Adjara Region. The strategy, which is in development, will be based on these experiences and developed in cooperation with PfRS and the
Netherlands-based smart mobility company MOVE Mobility.

The changes that have been implemented within the project are an important basis for development. The improvement of cycling infrastructure and raising awareness of the benefits of cycling increases public safety, reduces GHG emissions, improves property values and represents a lasting investment in long-term sustainability. Other major economic benefits include increased worker productivity, decreased overall infrastructure costs, reduced traffic congestion, increased tourism, all in addition to the direct health benefits arising from better air quality and far lower travel costs for Georgian families.

These achievements, in the words of PfRS Chairman Gela Kvashilava, “are inviting people onto the streets again.” By widening and improving walkways and cycle lanes, developing more riverside parks and attractions, and reducing adjacent highway speeds and volumes, more pedestrians and cyclists are being attracted, the city is becoming more liveable and attractive, as is common in other major cities.