Transport in Tbilisi – Vision for a Modern European City

For citizens in Tbilisi, moving from point A to point B can be both uncomfortable and dangerous. A combination of competing transport needs of cars and public transport, inadequate road design, poor management of traffic flow, and weak enforcement has been exacerbated by a growing population and inefficient public transport systems. The majority of citizens use public transport, but as the population grows and public transport systems struggle with the demand, travelling across the city is becoming increasingly difficult, especially at peak times. In addition, more and more cars, taxis and jeeps are starting to share the road with public transport vehicles with many cars even encroaching into pedestrianised areas by parking illegally. This lack of space continues to generate anger and annoyance amongst the public as well as increasing the number of road traffic collisions.

Air pollution is also a growing concern. This is not only a direct result of the city’s transport problems but it is also caused by inefficient urban development and urban sprawl. Many of the suburban areas in Tbilisi are becoming increasingly unattractive for living or for business, so new development is now almost exclusively concentrated in the central part of the city. This means that more people are commuting more often to the centre, and as the city becomes more congested, air pollution is rising well above the acceptable concentration of 3mg/m3. In some regions it is even reaching upwards of 3 or 4 times the acceptable limit. Up to 71 per cent of Tbilisi’s air pollution is caused by car emissions, which contributes more than 200 harmful pollutants to the atmosphere. This can lead to severe health problems such as breathing difficulties, dizziness, headaches and long-term illnesses such as heart disease.

In addition to rising air pollution, more cars on the road has also lead to an increased number of road traffic collisions. Almost half of which involve pedestrians. Till now, investment in road infrastructure has focused almost exclusively on road rehabilitation and neglected other modes of transport such as pedestrian pathways, cycle routes or alternative public transport means. But developing more road infrastructure does not mean that the already overwhelmed system of cars will become less congested and more safe, it means that there will be more room for more cars and more safety concerns. Focusing solely on car users thus creates a hopeless situation and props up a system that is the main determinant of health, social and economic problems in the city.

Further compounding these issues is a lack of up-to-date policy and inter-departmental coordination to manage the city’s transport systems. The Transport Department of Tbilisi City Hall follows old legislative norms which were created during the Soviet Union period, and of course do not satisfy today’s demands. Whilst the development of new buildings and roads (or the rehabilitation of old ones) falls under the remit of the Public Work Department, and the Transport Department does not have any information regarding these developments. As such, there is very weak coordination between Tbilisi City Hall and those working on road and transportation issues. Furthermore, Tbilisi’s transport policy is wholly inadequate in terms of preventing deaths and serious injuries on the road because their activities are not directed towards prioritising road safety. Tbilisi City Hall Transport Department does not have responsibility for analyzing transport problems. Therefore any solutions that may “put out the fire” in terms road fatality rates are not directly addressed. Rather, resources are continually directed towards road rehabilitation and new construction, as investments are often implemented at local levels with short-term results. Decision-makers are not developing a long-term transport policy and action plan.

The interconnection between five key elements of the transport service: transport network; transport means; parking; society; and management, needs to be greatly improved in the direction of integrated management. The main transport modes in the city are private cars, taxis and microbuses, which are not efficiently managed to provide inclusive mobility. The taxi system is also unregulated and does not satisfy the safety and comfort demands of citizens. The roads are becoming increasingly overwhelmed with individual and small vehicle transport which is congesting the city and creating more dangers for the roads and for our health. 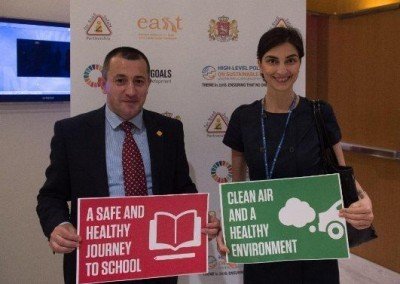 So, what should be done?

Improving the city’s transport policy means introducing legal and structural changes that combine transport and safety related issues into one package. The promotion of such will contribute to reducing the negative impact of traffic congestion as well as improving road safety. However, officials often make decisions based on vague or confused information and so, in many instances, projects fulfill only a narrow project aim and neglect wider issues such as traffic flow, road safety and air pollution. For companies that win contracts with Tbilisi City Hall for development work, projects must now consider compactness, controllable mobility and environmental protection as a minimum standard. However, these standards are not currently connected with sustainable transport development in Tbilisi. It should also be necessary therefore to create transport policies that will integrate land, environment, education, health and other policies in order to protect citizen’s interests and rights.The most urgent recommendation therefore is to improve coordination between the Transport Department, Public Works Department and Health Department and to develop a leading role for the Transport Department and other departments in Tbilisi City Hall. A road safety audit based on the standards of modern cities could start to address the key infrastructure problems that are worsening traffic and identify future opportunities for improvement, such as addressing mobility issues and the rights of different road users. In order to promote engagement amongst officials, a Road Safety Training Centre could also be beneficial to foster new skills and promote interdisciplinary engagement around improved decision-making. For example, a training course could cover topics such as reducing traffic congestion through the development of parking regulations, utilising rapid bus transit during peak hours and promoting transit-oriented development in central districts. This could result in a written transport management action plan coordinated amongst the different departments.Policy recommendations:

Promoting alternative modes of transport and developing public transport so that buses, metro, trams, trains and other transport means are well integrated is essential to reducing air-pollution. To start with, a pilot project that introduces park and ride or park and bike systems could be implemented to reduce congestion and improve road safety in the different districts of Tbilisi. Road networks should be well planned and road categories should be clearly defined especially in new road construction projects based on developed standards. Encouraging better and faster transit, through the development of parking in new constructions and the promotion of large plaza spaces for pedestrians can also benefit economic development by allowing people more time and space for leisure in the city centre.Policy recommendations:

One of the most important factors affecting the overall system is the lack of parking regulation and enforcement. There are currently no regulations on parking in Tbilisi. And as a result there is a serious lack of space along the roads for drivers, which compounds the problems of traffic congestion and road safety. This is especially problematic for public transport drivers as, when there is no space for a mini-bus or bus to stop, they are forced to stop in a traffic lane which creates a traffic jam and increases the risk of passengers being hit by a car when embarking or disembarking. A study to identify parking needs in central Tbilisi would therefore be hugely beneficial to inform future development work. Programmes aimed at the inclusion of multi-story and combined parking within new private sector construction projects could also help alleviate the problem of on-road parking. In addition, car drivers need to be aware of parking standards in order to create and promote a new demand-oriented parking system. This should help to reduce the amount of central roadway space currently occupied by private vehicles. Including a city-wide parking management system in any transport action plan is essential and should ensure that parking systems and strategy are considered in the planning of any new development.Policy recommendations:

The last set of recommendations should address urban development. To this end, the city’s transport policy should contribute to the creation of several different transport centres and hubs connected by large corridors. Indeed, developing the city around a series of “hub-and-spoke” centres connected by rapid bus transit would guard against the majority of development work taking place entirely in the city centre, in which everyone commutes to and from. However, Tbilisi City Hall does not at present have a decentralised policy plan. Transport planning, which should be one of the main elements of the city’s planning, does not exist and there is not enough human resource to carry out the daily monitoring and transport analysis. The city does not have a transport network development strategy or a citizens’ mobility plan. An innovative pilot project for alternative transport could be proposed centered on rapid bus transit. This would require little infrastructure investment while a transport plan for central regions in Tbilisi should be developed and aimed at improving the above-mentioned problems.Policy recommendations: